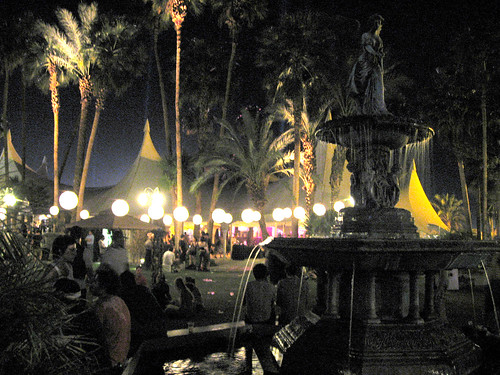 Much of today was spent sleeping off yesterday. Festivities started fairly early on Saturday afternoon as I trekked over to Wallingford to sip very sweet mint juleps and watch a horserace. Hats were required until the roses were awarded, and moments before the starting gates were unfurled we all chose horses and threw our dollars into a collective pool. Neither my bet on the favorite or on a particularly fetching grey horse paid off, but it was exciting nonetheless.

After that, a backyard afternoon. Grilling, puppywatching, lots of talking, and spectating the occasional hat dance consumed much of the day. For a few hours, it almost felt warm. The party continued retreated inside at early evening cloud cover and cooler air.

Later, to the Showbox to watch Andrew Bird. Astoundingly good as ever, though few of the songs were familiar since I haven't yet acquired Armchair Apocrypha, a situation that I should remedy post-haste.

By midnight, we were on the steps of the Seattle Art Museum to get tickets for a late night tour. We were lucky to be assigned to a 1:20 am entrance, and went to the very crowded (probably with other museum goers) Alibi Room to rendezvous with the rest of our party.

The museum was pretty great, definitely trippy and overwhelming at the end of a long day. Everyone in Seattle seemed to be there and running into people unexpectedly only enhanced the effect of being in a new art museum with exploding Ford Tauruses flying through the lobby, above a dance party, weirdly connected to the old steps which featured a crazy video installation. Throughout, music throbbing in the background and kids in prom attire strolling the galleries (certainly an ingenious scheme as a post-dance activity -- what could be hotter than afterhours art?). Soon, my brain crashed into a brick wall and I wandered, somewhat confused through the remaining floors, not able to decide whether the odd organization was a fiction of my own creation. I think that my favorite spot was the balcony overlooking the room with the large dress made from dog tags and the giant black rat sitting on a sleeping man.

We left without figuring out how to get our hands on one of those glowing blue star necklaces. On the street at 3 am, a line of people waited to get in. More museums should stay open all night every once in a while, it's great for the city to stay out late.
Collapse