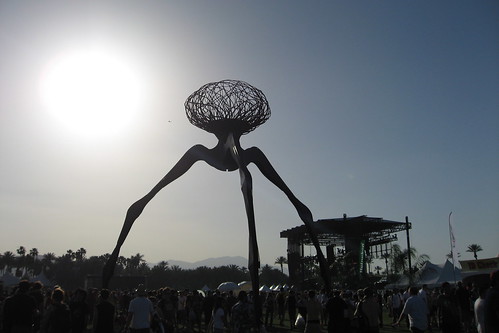 The Delta Terminal at the Los Angeles International Airport feels deserted. I've arrived nearly five hours before my flight because the prospect of being dropped off in the city for a few hours seemed like more effort than finding a power outlet, a window, and some airport food to kill time. Whitney had an afternoon meeting with baseball playing brothers in San Diego; so we woke up early and hit the hazy trail from Palm Springs relatively early this morning, but late enough that I had time to sit in the shade by the pool before checking out.

We'd spent the weekend in the improbably green manicured lawns of the Empire Polo Grounds in Indio for Coachella, an increasingly massive music festival in the middle of the desert. It sounds exactly like the sort of thing that I'd hate: 60,000 people milling around, sweating in 100 degree heat, crowding into tents or around outdoor stages. It sounds awful, doesn't it?

But now think of five (or ten or twenty) bands that you're dying to see; check the schedule and you're likely to find most of them on it. Yet it isn't simply the intensely great lineup. Return again to those 60,000 people, because without them it's functionally not very different from a listening party without very good climate control. They're the 60,000 people willing travel to the desert to endure those 100+ degree afternoons, the melting sunscreen, the crowds with their clever t-shirts, bikinis or short-shorts, purposely high-low LA fashion, because of that outstandingly curated lineup, the other people, the inventive art installations turn the grounds into an amazing, always surprising, and even more scenic wonderland, the hippie burritos at the veggie hut, and the urchins collecting ten discarded plastic bottles in exchange for a fresh bottle of water to stay hydrated (a genius idea for a green festival, no?). Repeat this for three straight days, hustling between five stages, assorted dance domes, misting stations, and scarce shade and by the end of it all, after an unbelievable proportion of the grounds have been filled with fans who came from all over the globe (many prinarily for the purposes of raging against the machine) have squeezed together through too-small exit gates, there we are, funneling out through the dusty parking lots after midnight, unable to resist spontaneous rounds of applause for ourselves, for each other, and for the whole fantastic ordeal. It's all kind of magical.

As for the actual festival, a grainy photoset [flickr] and a whirlwind recap:
( Collapse ) 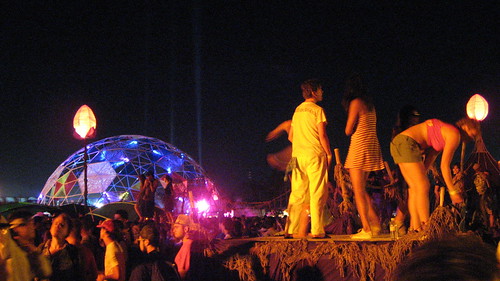 While lounging in the shade between bands, someone from Urb magazine passed out their special Coachella issue. The whole thing is excellent, but their "oral history" section [#] was especially good, with choice quotes from a lot of the people who have made it happen for the past eight years. (and Danny Devito). This, about Daft Punk's set last year is among my favorites:

Paul Tollett: I tried every year since 1999 to get Daft Punk. That was a last-minute fluke, and why our ad was late. I told their manager, “Here’s how it would be. It’s going to be in the dance tent, and it’s going to be legendary. I’ll do anything I need to do. Tell me what we need to build. Anything.” They put that whole pyramid thing together. But it took a lot of money to get that going. The cynic in you thinks, “Well, maybe we offered too much money.” But I realize what it was. We offered enough for them to make the pyramid, and that’s what it was all about. They spent every single dime on that production. They walked away from that show without a dollar from what we paid them. That’s true art. [urb]

Speaking of other publications, in addition to scoring an awesome condo, driving me to and from LAX, and wrangling a shiny silver wristband for me, Whitney blogged the festival silly for EW at Popwatch [1,2,3,4,5,6]. Other condo roomie, Alex, took a few nice behind-the-scenes photos [ew].

There's also the coverage from the Desert Sun [#]. Always interesting to read the hyper-local take on the festivities.
Collapse