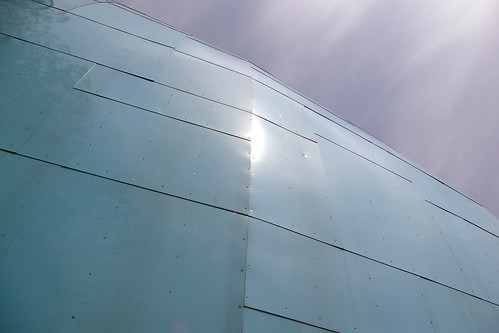 A mostly slow week. Cupcake birthday happy haircut hour at McLeod, then up to Neumo's on Thursday for Sunset Rubdown and Xiu Xiu. [mb] Aside from an insanely long sound check the always weird ever-shifting all-ages cage configuration, and some bizarrely rowdy and flash-happy audience members, it was pretty great with all sorts of raw onstage emotional overloads.

Much of the weekend was spent dropping into the EMP's Pop Music Conference. I was drawn in by the chance to hear Sascha Frere-Jones saying something about year zeroes at nine in the morning, but I got hooked and kept coming back for more. For any of the admitted cheesiness of the two museums, the EMP deserves a huge amount of credit for its part in these annual assemblies of critics, academics, really big names in pop media, and general music obsessives for this conference. I mean, talks about the rise and fall of the Rocket, Woodie Guthrie's conservatism and obsession with hydro-electric power, journalistic pranks (New Market, Va), Sleater-Kinney (x2)! Panels and discussion about the regionalism, advocacy, and the future of thinking about music professionally! And the cognitive dissonance of a talk about James Brown, "Soul Power" as a parallel response to "Black Power", complete with archival video from Paris, all in cavernous room decorated science fiction style that used to house the "Funk Blast" ride. Often strange, frequently interesting, and amazing in aggregate.

Tried to see Junior Boys last night, but the guestlist situation was messed up, which was more annoying than disappointing since I've seen them a couple times anyway and it meant missing Annuals and Blonde Redhead. Instead, just had drinks at the Satellite and went home. Oh, and there was also a long weird3 dinner at Qube on Friday.

Tonight, dinner at a big table at the Elysian. The fake meat BBQ sandwich was not the best idea. Lethargically slogging through laundry.
Collapse