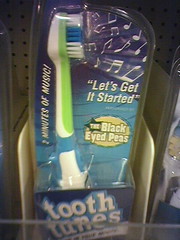 Dinner with the metbloggers was at Tavolata. I really loved the simplicity and minimalism of the space with its wall of bench, skylights, and cavernous ceilings. While the noise didn't make it the best place for a group, there's something to be said for not being able to hear the conversations of people sitting only a few seats away.

As someone whose primary sustenance often trends heavily in the direction of trader joe, breakfast cereal, and whatever takeout is the most convenient to my location when hunger strikes, I'm not an especially qualified food critic. That said, I was fond of pretty much everything I tried as even the ricotta gnocchi (remarkable for its welcome lack of overwhelming flavors) played into unhealthy fascination with fried starch products.

A couple hours later, a few blocks down the street. There's a polar bear's head on the newly constructed bar. A mechanical purr has taken over the front of the McLeod Residence lounge. At first scary, it soon becomes a zen bath best experienced sprawled out on the floor to give the vibrations more direct access to the skull.

Extra fortune cookies scones from happy hour are left to the grateful people of the sidewalk because the doorman at the Crocodile wouldn't allow outside snacks to enter the building. Inside, a parade of local talent in search of a gong performs before a rambunctious and not easily pleased audience. With the grand prize awarded we filter out onto the sidewalk. Soon, I'm curled under the hatch of a Honda insight that's barreling up the hill.

At the Cha Cha, a revelation in tequila on the rocks. Severe outbreaks of kissing (the new slapfight?) and teaching the kids to dance again. Then it's back to the street, hailing taxis, trying to convince a dubious cabbie that the guy who fell asleep promptly after being loaded into his backseat will be good for the fare. Returning money and cards to the passenger's pocket, I close the door and notice business cards scattered all over the curb.
Collapse