Google is hilarious today. Still, I almost believed that gmail might actually introduce Google Paper, only because there are people in my office who actually print every e-mail and file it away. 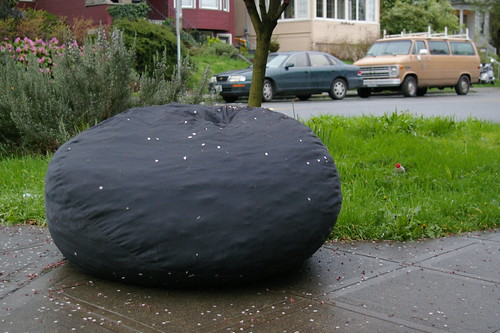 Spitfire on Saturday for the NCAA tournament semifinals was both fun and dispiriting. Upfalls include: watching basketball in a chromey fancy Belltown sports bar, laughing at the guys sitting next to us hoarding chairs to pretend that some of their friends would eventually show up, margaritas, guacamole, beer, fries, sandwich. Downfalls: idiot Florida fans trying to lead cheers, not getting into a brawl with UCLA fans, realizing that the finals weren't going to have a team that I could even pretend to want to win.

Man Man at Neumo's was pretty entertaining and a lot dramatic. They walked offstage in the middle of their set because one of their friends was thrown out for bringing her own bottle. A little reminiscent of the Beirut belligerence. Do bands really expect that clubs should flagrantly allow people to break the law just to make the talent happy?

No brunch today because it included a voyage outside city limits to maybe eat live food. Which, I guess, meant that I was much more inclined to actually take care of minor errands, domestic chores, chatting on the internet, talking on the phone, enjoying prime time reality competitions.
Collapse