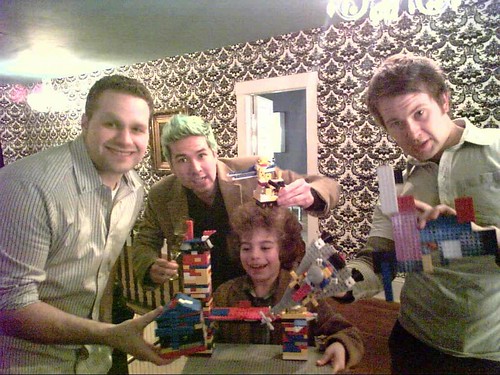 I am still laughing about the the cab ride I took on Thursday night. The driver recounted a story about a 6 ft 4 in "tranny" with the build of a professional football player who might have gotten into a knife fight at a gay dance club after someone hit on his boyfriend. Apparently, he punched the frisky guy, then was taken down by a bunch of people who kicked him. At which point, he threw off his wig, started pummeling, and police cruisers arrived to take him away. What?

The whole ride home, the driver kept yelling the word "tranny" in his nonspecific taxi driver accent as many times as possible. And he didn't remember the word "wig" so I had to help him out with that part of the story. It was definitely worth the nine dollar fare and not having to walk a mile and a half uphill at 2 am.

Before that, I had been at the McLeod happy hour eating clearance Valentine's Day candy, then over to the Crocodile not listening to the bands, and then back to the McLeod residence for more drinks with three of the Lashes & company. One of them ended up making out shirtless in front of the photobooth, and another got mad at me when I took KISS off the iPod rotation.

Last night I went back for a nine-year-old's birthday, where he was the only kid in attendance. We all played with LEGOs and had an interpretive dance party to 80s music.

Tonight, Babel just to be informed for making angry comments during the Oscar telecast.
Collapse