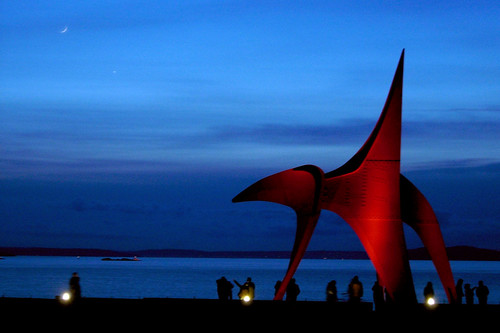 Are you listening to the new album from the Shins yet? Surely you know that a streaming version of Wincing the Night Away is right there on the internet [myspace] just waiting for you to get hooked. Particularly on the first four tracks -- the tiny cymbals that kick things off a minute into "Sleeping Lessons" and make you wait another minute and a half for things to really get going. And then they're careening and doing cartwheels off cliffs in "Australia" until the whole sequence gets wrapped up with "Phantom Limb -- and all of their neato shimmery melodic instruments.

That proposition is easier than rigging up a time machine so that you could go to yesterday's opening of the Seattle Art Museum's new Olympic Sculpture Park. The weather was the best its been in months, perfect for crowds of people and their dogs to revel in an odd source of civic pride while Target advertised their sponsorship by handing out cups of hot chocolate from space age backpacks. The plants and all of the sculptures aren't quite ready yet and idiots have already written messages on the Serra piece, but there were green lasers flickering over the grassy steps, a new beach, and with the views of Puget Sound, it was a pretty great place to be at sunset.
Collapse