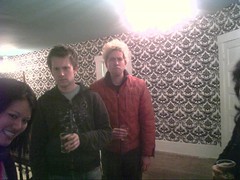 I saw These Arms Are Snakes and Akron/Family on Friday night. It was interesting, but I already typed some things about it elsewhere [mb] (which seems to be standard protocol. mostly because it's easier to get in that way, and I think we all know how being on guestlists is among my few ambitions). I was pretty excited about the show ahead of time, but it ended up feeling more like an endurance event. Maarten, who was thoroughly impressed with the intense hardcore of T.A.A.S., ended up missing a bus after the bars closed so we ended up hanging out for a while at my apartment drinking some of the beer left in my refrigerator.

On Saturday afternoon, I went to Remedy Teas to do some work and ran into Carole & Atri. My tea tasted like a campfire, in a pretty o.k. way. Later, we met up with Carolyn for dinner and watched Volver . It was really nice. That doesn't sound like much, but I mean it as a high compliment. I like it more and more after a few days.

I tried to see the fake snow at Pacific Place tonight. I was walking that way for some hair maintenance work anyway, but by the time I arrived it was over.

Since I was in Belltown, I dropped my the McLeod Residence. It's looking amazing. They have some hot wallpaper, chandeliers, paint, and lightboxes in place and plenty of other nifty stuff on the horizon. Of course, the star is the touchscreen photobooth, which was being installed while I was there.

After watching some sawing, eating a hot dog from Shorty's, and taking a tour, I went to have some drinks at the Redwood with people whose lj usernames I don't remember. At the bar, some kid was really stunned when they didn't have PBR and he couldn't quite bring himself to order Oly.
Collapse