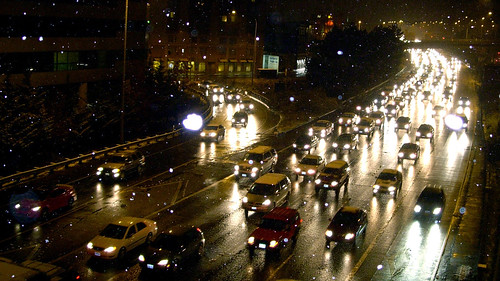 Let's just be clear. The thing that makes this little string of snowstorms so charming is the expiration date. We know that the pretty white flakes that lodge themselves in our hair on a walk home from work, or that accumulate just enough for kids on the street to throw a snowball down the sidewalk at their friends, or that make you kind of want to fall in love with everything for just a few moments will be gone in a matter of seconds, hours, or maybe a day. It won't have time to create knee deep treks to the video store. Your housemates won't need to dig your car out of the parking lot with a broom and a rake and push you out of the driveway because you forgot to buy snowshovels. There won't be weeks of after school parkinglots with everyone brushing snow and scraping ice according to their own personal philosophies. But for now, it's pretty neat.

On Friday, I went back to the scene of my absentmindedly lost bag and it turns out that someone found it and left it with one of the restaurants in the foodcourtish cafe. Before it was turned in, my iPod disappeared from the front pocket. The stupid thing is that it's old and scratched and the battery only holds a charge for a few hours, meaning that it probably wasn't worth a whole lot except for the fact that it has several years of music that I never backed up.
Collapse