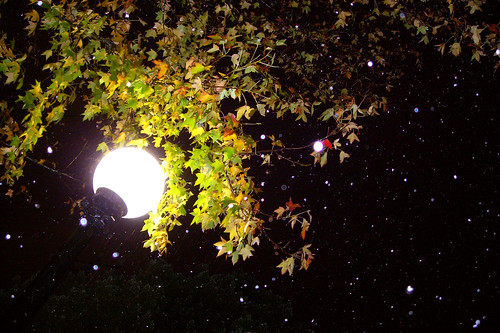 Just like every year, Seattle is getting one of its few days of snow. On Broadway, the flakes were the perfect sort snow just on the other side of rain, disappearing into water a few feet above the ground, like mood lighting. A few blocks up the hill toward my apartment, slush was accumulating on the sidewalks. I didn't investigate the situation at the summit. Perhaps just a few blocks away kids have broken out their sleds.

Mostly, I used the weather and the long weekend as an excuse to be lazy, spending much of the afternoon finishing the Children's Hospital [$]. I'd started reading it a while ago and got stuck somewhere in the middle, worried that I'd never finish the remaining three hundred pages. But the cold, wet weather provided sufficient motivation (and an appropriate backdrop) to make it through the rest of the melancholy, creepy, yet light, engaging, and compellingly readable (magic realism) flood epic.

I also ventured out into the world to eat pizza at the new Tom Douglas place and see Casino Royale. It was my first James Bond movie and I found it mostly entertaining. It was definitely better once I abandoned the front row. That was the only place available when we arrived, but all of that action on the Cinerama's giant screen was too much and I had to escape it for an empty seat about a half hour into the too-long movie. With five of us for dinner, we sampled most of the pizzas at Serious Pie. All of them were good, but Via Tribulani is still my favorite of the wood-fired thin-crust pizza places in Seattle.

After the movie, we went to Kincora for cheap beer. While we were drinking, Santa, an elf, and a hipster entourage stopped in for drinks. As weird as it was to find myself in a gritty bar with a band of costumed merrymakers, it's one of the best parts of the neighborhood, how this sort of thing is natural and not self-consciously quirky. It's hard not to be sad that by this time next year, that entire block will be shut down to make way for boring condos.
Collapse