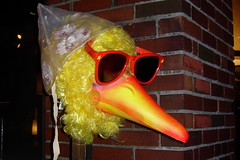 I'd sort of been ambivalent about seeing the Rapture until I started thinking about how much fun their show was last time [-3y] and how much I missed the weird but good wide/shallow stage at the Graceland. There have only been a few shows in as many years that I've wanted to see since the club changed its name to El Corazon and the exterior from red to blue; so I was pretty excited to go. Maarten came and we marveled at the new decoration and the still horrible bathrooms. The show was energetic, the audience was into it, and the sound system was set to molecule shaking [metblogs], but I think that the original was better. Just because I'm old and nostalgic.

We missed the memo about the Rapture's DJ set and walked up the hill to get more drinks after the show (rather than waiting in the giant line at El Corazon). We ended up at the Captiol Club where a woman was playing music and projecting muted 2001 and the Man Who Fell to Earth on a white sheet. The scene got slightly weirder when the guys from the Secret Machines showed up.

Earlier that day I saw them playing a free show at Westlake Center. First, KEXP's morning DJ chatted up Bill Gates to sell people Microsoft's new mp3player. Then thee Secret Machines played a few songs for the same cause. Seconds after they finished, it started raining and people handed out Zune-branded rain ponchos, that were nowhere near as fancy as the ones worn by John and Bill.

Last night I trekked out to Fremont to hear Chin Up Chin Up at Nectar. The place smelled of burning rubber and was underfilled, but the band made the best of it. Due to weird bus schedules, lateness, and thriftiness w/r/t taxis, the evening involved a lot of walking. First down one hill and later up another one. I also learned that Fremont is much less fratty on a Tuesday night.

Somewhere along the line, I think that I managed to acquire a cold; so spent the afternoon looking forward to curling up with a bottle of NyQuil. Except that it's now free of pseudoephedrine, which sounds like a recipe for disappointment.
Collapse