After a thrilling series of meetings yesterday, I went for a swim at the IMA and ended up with water in my ear. This, combined with the bus ride home left me in a state of low-level seasickness well into the early evening. Or maybe it was the smoothie with orange sherbet?

Anyway. I tried to nap it off and then headed down to a fashion show that turned out to be more like an infomercial for people with loads of money who like models and dislike cancer. Kind of entertaining, because who knew that Seattle had seven hundred people who'd pay to go to SoDo to watch a runway show of items that will show up in boutiques next week?

When that spectacle came to an end, I called

janehex and told her to jump off of the Bainbridge ferry so that we could walk around "West Edge" indecisively looking for a place to get an adult beverage. Fleeing Pioneer Square, Samantha recommended that we go to the Zig Zag, but when it was too far away we settled into the Alibi Room instead.

And this morning, the barista at Vivace had an extra shot; so I'm still running on a triple cappuccino. Whee! 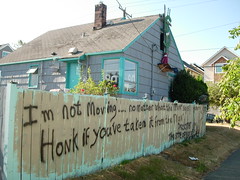 Happy hour on the patio at Hale's Ale required a long walk through the scenic Interbay Industrial district, past electrical transformation station, a house whose nutjob occupant was pretty fed up with "the man" [aren't we all?], and a makeshift warehouse and semi-truck furniture sale advertised by statues holding signs. As for the deck at the bar, it was pleasant except when the compulsive manager freaked out about any rearrangement of furniture and possible domination of the patio by a large group. For that, they have tables inside.

As dusk fell, we raced down to Seattle Center to watch Casablanca, which was, of course, wonderful. That is, aside from evenings getting a touch on the cold side and the DVD going all pixelated and skippy just as the authorities wheel in to the airport. They restored the audio for the "beautiful friendship" line, but it didn't really avert the tragedy of the botched ending.

Saturday Night? Some combination of CSS + Diplo at Neumo's; S at the Crocodile; or BOAT at the Sunset Tavern.
Collapse