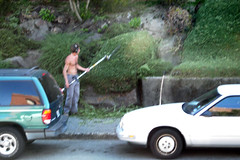 I know that some people [stranger] are freaking about ridiculous new proposals to regulate nightclubs to make the city quieter at night. But who is looking out for those of us who do our best work between 11 am and 7 pm? And by "those of us", I mean the sort of person who is easily convinced by an excessively charming Scottish band1 that the best thing to do after leaving their show on a Sunday night is to go to the Cha Cha to see if they, in fact, have excellent margaritas.2

Because once you're there, sitting at the bar under the kitchy cabanam pretending that the mist occasionally being sprayed by little air conditioner over the front door is reminiscent of mist off of the ocean on a cool evening, being entertained by the freedom rock fashions and the people down the bar drinking Jagermeister from coffee cups, and waiting for the band to show up so that you could gawk at them from across the room and hope to catch the sound their fantastic accents, it tends to be a late bedtime. The last thing that you want to hear the next morning is the sound of the shrubbery across the street being trimmed to within an inch of its life. And no amount of sleepy stubbornness or NPR can remedy the early wakeup call and you end up spending the whole afternoon feeling like a zombie who can't go home to take a nap because it's way too hot everywhere else.

Where are the draconic laws to protect me, is what I'm saying?