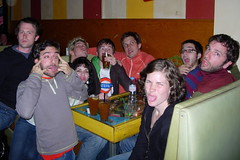 tapes 'n tapes by joshc.
Although the Crocodile was way too crowded (and oddly divided into the all ages and caged alcoholics sections) for tonight's Tapes 'n Tapes show to turn into the dance party the band deserved, it was still a lot of fun. They played all of their (mp3blog) hits and even brought out a euphonium, which pretty much guarantees a good time.

After the harsh lights came up in the showroom, we were chased out to Shorty's where were enjoyed various hot dog concotions. Later, the band showed up and sat down for a couple pictures. Or, let us invade their booth for a couple photos. This one is the ever-popular crazy faced version.
Collapse