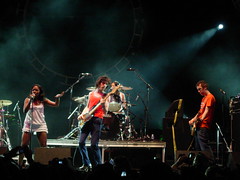 I got back to Seattle early this morning and managed to put a bunch of pictures from Coachella online this afternoon [flickr]. They're mostly a way for me to remember what I saw, but there there in case you're interested. I'll probably type up a highlights reel later this week.

Today was busy with a couple of SIFF press screenings and a visit to Elliott Bay to hear Benjamin Kunkel read from the paperback edition of Indecision. I expect that this is the same as the hardcover, but the book being in paperback now is probably why he's back on the promotion circuit. He was charming, talked a bit about n + 1 ("interns are like slaves for prestige") and read from chapter 2, which is one of the better ones.

Also at the reading was this guy who I see all the time around town. We met a long time ago, but I definitely don't remember his name. This is probably not an uncommon problem, but I have a pretty fantastic memory for recognizing almost everyone that I've met and usually the circumstances of our meeting, without actually ever processing names. Usually this works out fine, because these friends of friends or two-minute acquaintances are equally or more forgetful. It's the asymmetric memory situation that poses something of a challenge.
Collapse