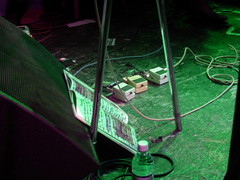 After work on Friday, the student contingent set off to enjoy happy hour at Rosebud with other people from our department. There, I learned that a greyhound is like a salty dog, but without the salt. I'm not sure why the guy at the bar thought I should know this, but I'm really glad that I do now, because salty grapefruit juice sounds really awful and I'd hate to accidentally order it. We subsisted for a few hours on two dollar well drinks and free pretzels in the not crowded bar, but eventually gave in to the need to eat actual food. Since Majaraja was incredibly convenient, it won. Plus, the food is pretty good [I realize this isn't saying much, since over the past few days I've been strangely drawn to food court food.]

I know what you're thinking -- eating food near the time of a Band of Horses show? Very dangerous, given the events of the Strangercrombie event in which fried okra eating caused us to completely miss their set. But alas, this time I had intelligence on scene to warn me of any early start times and ate with one eye on my phone throughout dinner. When we'd settled the bill, I went over to Neumo's and met up with Samantha, who had secured a premium spot near the stage and not under the speakers. Her friends had been abducted by aliens, but we held our ground.

Aside from a couple of howling fans of Sera Cahoone, our neighborhood was pleasantly devoid of annoying superfans. One girl did spend some time between sets sketching a picture of Ben Bridwell and a horse. She slipped the note onto his pedal steel when he wasn't looking. The show was really good, but I suppose that's no big surprise. The band has been getting better and better ever since I saw them opening for Mat Brooke's solo show a couple Novembers ago. This time, there was plenty of westernwear onstage, occasional enthusiastic fist pumping, a few forgotten lyrics (thank goodness for fans and words written over pictures of ponies!), and Phil Ek behind the soundboards making everything sound extra fantastic and shiny.

Saturday was rainy; so I went to work for a little bit, ran some errands, went to the food court [I have no idea], and saw Jamie Lidell at Chop Suey, which was, of course, loads of fun.

Yesterday, I failed in my quest to find discount chocolate [this is getting serious!], read a little bit, talked to my dad on the phone, and went swimming. Then I met up with Carolyn and we quickly ate slices of pizza before going to watch Brick.

I'm not exactly sure about the movie. It was entertaining and super-styley and more than occasionally funny. I missed a bit of the dialogue here and there because it seemed to come from outer space, but it all pretty much worked and transcended its highschoolers playing dress up premise.
Collapse