Another artifact. This time, scenes from a train ride (~ two minutes). 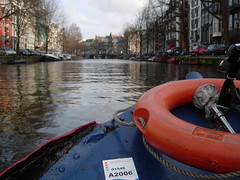 With time growing short in Amsterdam, I felt the pull to check some boxes off the tourist agenda. This started with a late-morning visit to a pancake house (cleverly named Pancake House Upstairs). As the name implies, it is located at the top of an exceedingly narrow stairway. The restaurant is in a tiny space that accommodates about five tables and whose ceiling is decorated by tea kettles. Instead of a savory pancake, I went for the sweet option -- a large, dense pancake covered with chocolate, coconut flakes, bananas, pineapple, and whipped cream. Sort of like a unrolled, thicker, less crispy crepe.

After lunch, I made an attempt to buy souvenier-type objects, but mostly failed. My main mission was to find a t-shirt for the Dutch National Football team, but everything I found was either crappy, or official expensive jersey style.

The shirt hunting was cut short because I had made an appointment to go on a technically-illegal boat trip. The way that the St. Nicholas Boat Tours work is that you sign up for a tour at a comedy club on Leidseplein, wait around in the bar at the appointed time, and then follow the volunteer to a the boat. Before this, you are advised to pick up snacks or beverages. The illegal part is that they aren't technically a commercial operation, so all fees take the form of donations and tips.

So that's how I came to be on a small boat excursion of the canals on a sunny Saturday afternoon with a delegation of Israelis, Turks, Germans, and a couple Americans for good measure. Our tourguide was an expat American, who spoke with an accent of someone who has worked very hard to eradicate any trace of Chicago from his diction. The tour itself was largely unstructured and took the form of a floating picnic, with community paprika flavored Lay's potato chips and marijuana making the rounds courtesy of the Israeli bachelor party and the German twentysomething couple. We went under shallow [?] bridges, past the zoo, the Botel (a defunct Russian cruise ship turned hotel) where a soldier-looking guy was leaning out his open window, and lots of canal houses. The boat itself was small, from the early 1900s. Maybe it was just pre-leaving nostalgia, but it was one of the better touristy things to do in the city. Very gezellig.

After the nautical adventure came to a close, I went to Paradiso to see Victory at Sea play. I mostly went because I was meeting a friend in the neighborhood later that night, the band was from the U.S., and it cost only three eurodollars and gave me an excuse to eat fried bar foods between sets. They were actually pretty good, too.

Before meeting people at a somewhat unnamed bar, I got some indonesian food that was less than delicious. Possibly a consequence of hasty ordering when the vegetarian daily special was sold out. Later, I caught up with one of the epidemiologists from Leiden and some of her friends. One of the guys took care of all of the beer ordering; so it turned out to be a nice array of great beverages.

And to round out the experience, I went home by bicycle.
Collapse