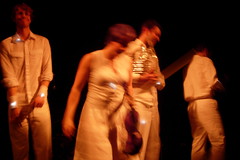 As promised, I went to Paradiso last night to see the Bell Orchestre. When I arrived, the large and pretty concert hall was completely empty. I wasn't expecting hordes of adoring fans, but I also didn't think that I'd be the only one there. It turns out that they were playing in the small hall, which I knew (but I didn't know which was which).

While the room wasn't packed, it was a nice sized crowd for a Monday night show. I spotted someone in the crowd wearing a Harry and the Potters t-shirt and possibly pajama pants sitting on the floor waiting for the show to start. Awesome.

And speaking of trend-setting, the band arrived all dressed in white and glowing. From within. Seriously people: fashion statement for 2005 = sweatbands over LED lights, LED lights in pockets, etc. Of course, instrumental rock-ish music followed, leading some members of the audience to rock out like crazy. Later, the band gave away a poster for the first person to yell "poutine" in response to a question about Montreal's most famous food.

The hot Amsterdam trend seems to be starting rock shows really early. This one didn't even have an opening band; so everyone could get home early on a school night. That is, everyone who didn't stay to join the intensely pot-smoking reggae fans of Junior Kelly show in the big hall.
Collapse