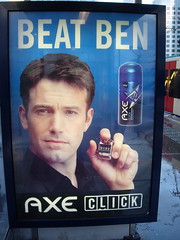 I got back to Amsterdam yesterday morning. Phoenix was nice and sunny. Somehow, I forgot to take any pictures; so you'll need to take my word for it. The hotel had a "lazy river" (so lazy that some paddling was required) and a waterslide (tip -- assume luge position for maximum effect) and a mini-golf course (sadly lacking in obstacles). However, it was expensive cab rides away from the city; so the hive of Seattleites mostly did not stray far from our temporary home. The conference itself was pretty good: no one told me my posters were stupid, some of the talks were interesting, others were fun for back-row criticism value, and it was nice to see everyone from the office for a few days.

Now I'm here again and the days are suddenly getting noticeably longer, which is nice and might be helping with the general avoidance of ultra jet lag. Also, since my return flight was completely empty (like the first flight, it was scheduled for a major U.S. television holiday -- first the Super Bowl, then the Academy Awards); so I was able to grab an entire center row and sleep for several hours on the way.

The picture accompanying photo is from a train station here. Contrary to what you might first assume, it is not a campaign to incite violence against Ben Affleck. Instead, it's his campaign to get you to spray AXE bodyspray all over yourself to lure women (and the occasional man, if the commercials that play in movie theaters are to be believed) to flirt with you so that you can keep track of their advances with a handheld counter. Er, maybe it sort of is a campaign to incite Ben-related beatings, too? 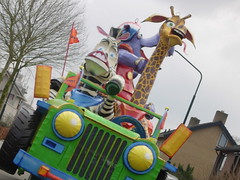 Death Cab For Cutie are playing down the street tonight, but my failure to get ticketmaster.nl to recognize my existence before I left for Amsterdam prevented be from getting in. Plus, it's raining tonight and I've seen DCFC many times and didn't feel like pressing my standing in the rain ticket getting luck from last week. Instead, I stayed home and cooked spaghetti and fake meatballs and watched some copies of the last two episodes of twenty-four that I found on the internet (holy body count!). I am such a terrible tourist.

The picture is from two weekends ago, because I forgot to post about it with all of the getting hit in the mouth by the skulls of English girls (a guess, since they were shorter than me) at the Arctic Monkeys show and dashing off to Phoneix. Anyway, last Sunday my friend Job (who spent a year working in Seattle) took me on a road trip to his childhood village for Carnaval festivities. Mostly everyone in Amsterdam warned me against these silly pagan rituals, but I was up for the adventure and agreed to meet him in Amersfoort, where he was waiting with his car. I ignored local advice and arrived uncostumed, but prepared for drunkenness and debauchery.

It turned out to be an excessively wholesome affair. We spent the day with his mother and his brother's family. The nieces and nephews were in the smaller of the two village parades (where all of the entries are in competition for cash prizes) we saw. Unlike many of the other entries, theirs was not related to the recent change in the national health insurance program. Other popular themes were plays on words that spring from the supposedly limited Dutch vocabulary. Admittedly, we only stayed until early evening -- who knows how crazy the town went at the awards ceremony? -- but it was a really nice day out in the Dutch countryside.

Other things from last week included a visit to the Nieuwe Kerk to see many of the Indonesian relics plundered during the colonial periods and military actions, half of which typically resides in Jakarta (the other half in Leiden).

I also got to witness a Dutch promotion ceremony, the equivalent to a doctoral dissertation defense. Unlike our department, where people typically book a small conference room for their presentation, this one was held in the old Lutheran Church. The committee members wore academic costume and were limited to forty minutes of question asking. This was enforced by a woman with a large staff (sceptre?), who demanded that the interrogation stop at the prescribed time. This was followed by a presentation of a giant diploma and then a reception at a nearby cafe. Apparently, it is a significant financial commitment, akin to marrying yourself. The student funds the publication of many paperback books containing the dissertation papers as well as all of the catering for the celebration. The formal setting and stick-wielding enforcer are appealing, but I think I'll be happy to stick with the low-key UW procedures when I finally finish my degree. 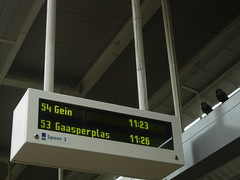 I've been meaning to listen to Terry Gross's interview with Stuart Murdoch [npr] all week, but have avoided it because I usually only listen to Fresh Air when I want to fall asleep in the span of zero to five minutes. Since I'm actually interested in hearing about Belle & Sebastian, this poses a problem.

As a remedy, I recorded the interview while I was doing dishes and converted it to a mp3 for morning commute listening on my iPod. In case you're also interested in having a more easily portable format, I've posted the mp3:
terry gross vs stuart murdoch.mp3 (56 MB)

I'll probably remove it in a week or so. They also have a full recording of a New Pornographers / Belle & Sebastian show at the 9:30 Club posted online [npr].
Collapse