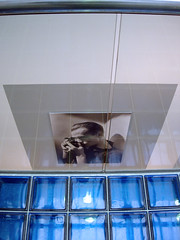 There's a little yellow bar outside the hospital that looks from the outside like something you'd find in the middle of nowhere on a cross-country road trip across the great plains. Inside, it isn't all that much different except that the paneling might be made of real wood. After work, a bunch of people adjourned to have beers to commemorate the end of the week. Many of them ate something that may have contained horse meat. Partially because the French woman demanded it, everyone spoke English all the time.

On Saturday I tried to get my bicycle's minor repairs taken care of. I was only partially successful; tightening the bolt doesn't seem to be a sufficient long-term solution and I will probably need to deal with this again. That night I went to the movie theater / bar near my apartment to watch Grizzly Man and tried not to pay too much attention to the subtitles. Both Herzog and Treadwell have such hilarious voices it was sometimes difficult to appreciate the possible seriousness of the film.

The next day, the air was full of snow, but it didn't stick. It just looked pretty and made everyone cycling around look a little more magical. I walked to foam to have a look at the Henri Cartier-Bresson retrospective. It was, as you might expect, pretty fantastic. They had vintage prints and other ephemera, but I mostly found it interesting how the decisive moment isn't necessarily always in focus. Still, it seemed like Sunday afternoon at the photography museum wasn't a unique idea: the gallery was extremely crowded and I soon felt more agoraphobic than usual. Also hungry. So I eventually found a table at the small cafe downstairs and had a cappuccino and a piece of chocolate pie [not exactly] for lunch and read some more chapters from Running With Scissors1. Later that night I had Indian food in this little place in my neighborhood where I was the only person in the restaurant and the owner and employees were watching the Phantom Menace instead of the Olympics. On the way back, I noticed another cafe with speed skating on television and I went inside to watch Apollo Ohno not win his short-track medal.

--
1. I know that everyone was all worked up about Freygate and the liberties he took with the truth in A Million Little Pieces, but after finishing Running With Scissors this evening I would almost prefer to believe that Augusten Burroughs made up a lot of his messed up childhood.
Collapse