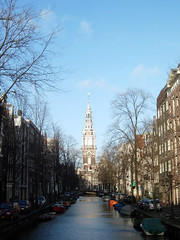 Yesterday I ran out of things to do at the lab, so I went back to town early to seek out a student ID. Since I was there, I walked around a bit. The clouds had gone away and it was sunny and much more scenic, but still cold.

Looking around some shops, I noticed one bookstore had copies of Butt magazine for sale and thought of the Stranger's weblog.1

Today I rented a bicycle. This involved going to a student information center, standing in a courtyard, getting a raffle ticket, and waiting for my number to be called while a surprise snowstorm made a five minute appearance. There were more bicycles than students wanting them; so the lottery was mostly a way of deciding who among the not-short girls got to pick first. Demand had been higher earlier in the week, leaving a few women without suitably-sized vehicles. Despite getting an early number, I managed to pick one that has a loose pedal, which should be easily fixable. Having this will no doubt help my sightseeing and is likely make it even easier for me to get lost even faster than usual.

The bike included two locks: one built-in to the back tire and another that attaches to a heavy chain. Apparently, vandalism and theft are big in these parts and the junkies love nothing better than to sell stolen cycles.

We also started a batch of lab work today. Although I was allowed to do a bit of dilluting with the micropippetters, I mostly spectated during the tricky and time-sensitive parts. But I got to wear a lab coat while doing this; so it felt very scientific.

Other workplace news: at lunch I had bread with butter and dark chocolate sprinkles!

--
1. Speaking of "the slog", one of today's posts spoiled me to the ending of last night's Project Runway. I can't figure out why it takes so long for this show to appear on the internet.
Collapse