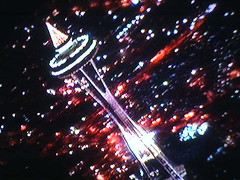 
next day editing: . . . and somehow I failed to take a picture of the television when the space needle was actually exploding.

Even though I'm almost completely certain that I didn't get into any fights last night, I woke up this morning to find two knuckles on my right hand scraped up a bit. earlier in the evening I think that Ellen and I had a fake battle, possibly about the relative merits of two tracks on Set Yourself On Fire, but it didn't amount to anything because (1) I'm not a hitter and (2) I don't care about winning. 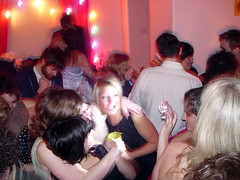 For most of the day, I circled my apartment feeling stupid, washing dishes, taking out the recycling, and almost falling asleep for a few minutes of each hour in a string of Law and Order: Criminal Intent episodes. Eventually, I remembered that I needed to get stamps to send my rent check and forced myself out into the world. However, it was too late for the post office to still be open. I made the most of it by pre-shopping for wizard clothing, buying some cheater hemming tape, going to the ATM, and most importantly, getting a cappuccino. While I was buying things at QFC, Ellen called to report that the wardrobe theme had been abandoned/changed to once again wearing the vintage/thrifty tuxedo.

She came over the my apartment to listen to the Yeti 3 CD and then we went to conference with / help Kenny and Joey move out of their apartment. I was super helpful in my capacity as refrigerator door holder and occasional item carrying. Once the apartment had been completely emptied into the cars, garbage, recycling, and free pile, Ellen and I left to go to dinner at Chutney's, which was actually good (for some reason, I had the false impression that it wasn't). Not on the way, we stopped at the Washington Mutual (before) and went and bought some sparkling wine at the QFC (after). More on this wine, later.

We made it out of the food coma and back home to get dressed / re-hem my pants with the iron and tape. With a nod to the previous theme, we subtly communist wizarded it up with some awesome paraphernalia by way of Joe. Since we were optimistic in our scheduling, we were ready in time to walk up to Kenny and Joey's new condo and past the Incorrect! apartment. Unfortunately, the blinds were closed and I couldn't see it in all of it's Incorrect! glory.

When Joey, Kenny, and Doug were sufficiently blazered-out, we piled into a car, picked up / met people at Mildred's apartment and drove downtown to go to a party in someone's high rise condominium in the building with the yellow band across the top and the (unfortunately) preserved old facade at street-level. Although none of us could really see the appeal of high-rise living, the view of Seattle from the west was interesting, if not a little unsettling. Two terriers with (possibly cashmere) sweaters / assless chaps lived in the apartment and were completely adorable. I think they were the minimum size that I consider appropriate for a dog to be. I had an idea about getting a dog, except that I'm going to Amsterdam for two months and Ellen told me that importing pets is complicated business.

After we'd had at least one cocktail and some people went to the rooftop dog park, it was time to depart for Ballard. On the way, we passed a guy in a kilt puking into / or digging around in a bush near the Crocodile, where there seemed to be many other people in bad Hedwig-watching clothing standing outside to smoke.

The Ballard party was mellow and nice. Across the street, there was a gigantic house with its own waterfall. Kenny wanted to put dish soap in it, but the party's host persuaded him not to do it. We were at that party when it was midnight in Seattle; so we gathered around the television and watched the Space Needle exploding while we drank that sparkling wine from QFC. Even though it wasn't a bargain beverage, in combination with previous drinks even a little bit had a toxic effect and I immediately needed a break from any drinking. Even though I didn't need to have the car stopped somewhere in Ballard to vomit before continuing on to a Capitol Hill party, I think that my new policy will be not to mix champagne with any other alcohols.

The last party was where all of the hipsters were. It was a good level of crowded with fun music and a wizard or two thrown in for good measure. While we were there, I'd recovered from the bubbly and returned to my new habit of drinking whisky from the bottle and beer from the refrigerator. I sort of forgot about how volume != amount of alcohol and a got maybe a little bit drunk, based on looking at my camera and finding that I'd taken pictures of strangers? By something like three am, we went home and listened to some of the songs that were in my "most played" list and I drank a lot of water and fell asleep on the couch because Ellen was in my room reading the Magician's Nephew just to end the evening on a wizardy note. 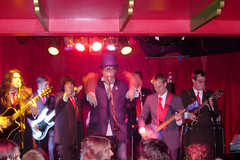 On Friday night, I had planned to stay home to finish reading One Hundred Years of Solitude, but I started looking at the Stranger's (really good) "Regrets" issue and found the "Stranger Suggests" section. It was sort of hidden because the right margin was used for the "I ♥ Television" column. Anyway, the Friday suggestion was for "All Things To All People" Anti-New Year's Eve variety hour at Chop Suey and the suggestor suggested that it was likely to be the best night of my life. So I sent a text message to Samantha and we met up there. The blurb promised that the event would start at 9 pm sharp. Because of the missed Band of Horses fiasco, we took this very seriously and arrived at the suggested time, which was about an hour too early. Eventually though, the place (newly decorated with a giant gold dragon) filled to extra crowded capacity, many of whom reminded me of Chris E.'s
rule of thumb about the amateur hour population density for weekend shows. Just little things like people being extra bumpy and a pack of dudes, some of whom had special space-requiring dances for Harvey Danger songs.

The show itself was a good mix of kind of mostly entertaining punctuated by occasional misses. Sean Nelson hosted and wore a top hat and showed comedy videos and archival footage of a choir performance and a rant from a homeless guy. There were a lot of acts, most played very short sets. For instance, the All Girl Comb Choir did a cover of "Maps", John Roderick did a cover of "the King of Carrot Flowers" and tried (but failed) to do a cover of "Save Me", Awesome covered/impersonated They Might Be Giants, and Harvey Danger ended their set with a trio of covers that included something in French and a Long Winters song.

Although the event was supposedly anti-going out on new year's eve they actually tricked us by keeping things running well past midnight.
Collapse