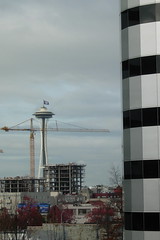 uw by joshc.
At the end of the contest, Washington State University fans donated more money to Habitat For Humanity than University of Washington fans; so the Space Needle will be painted red & gray. Whether this reflects an income disparity or a enthusiasm gap, it still feels kind of disappointing.

Hate on Starbucks all you want, but if their peppermint mochas are wrong, I don't want to be right.

Amazon.com is running a sale where you can get the first two seasons of Arrested Development on DVD for $31.94 if you "buy them both and save." I don't usually buy DVDs, but this seemed like such a great deal that I couldn't resist.

Plus, it's a nice artifact and I'm sure that the series holds up to repeated viewings.

Last night Jeff and I went to see a preview of Syriana [apple], which was showing at the H.U.B. as part of the New Yorker college tour. The movie was Traffic, except about oil. The first twenty or so minutes were projected using the wrong aspect ratio; so all of the actors appeared to be playing a race of tall, thin, humanoid aliens. The side effect of this error was that the entire image didn't fit on the screen. At first, the bottom 20% was missing. This wasn't obvious until more and more scenes took place in a language other than English. When the projectionist noticed, the picture was shifted such that the subtitles were viewable, but the tops of people's heads weren't. Eventually, to much applause, they stopped the film and fixed the problem.

As for the movie, it was well done, but just about as bleak as you might imagine a film produced by Steven Soderbergh about oil and corruption would be. There were a couple of plot threads and characters that I had trouble connecting to the overall story, but I'm going to give it the benefit of the doubt since we did miss quite a few captions and subtitles.

After a post-Q&A Q&A, there were some songs, which were pretty good. Even though Malkmus seemed to forget a few of the words from time to time.

On the way into the Showbox, both Carolyn and I were hungry and considered going elsewhere to get food before going inside to find a table (it was a seated event, furthering the weirdness). But the door guy promised that they were serving their bar menu; so we went in and were disappointed to find that tonight's bar was foodless. I guess we looked sufficiently disappointed or hungry, because our waitress managed to bend the rules for us.

It only occurred to me after eating that the staff may have poisoned our food to punish us for being difficult.
Collapse