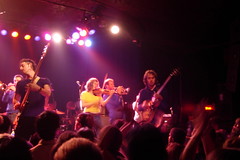 broken social scene by joshc.
Yet another catchup post.

On Saturday, I met Samantha (gingerlee.blogspot.com) at the White Horse, which is a cool sort of hidden away tavern on Post Alley, before going to the Showbox to see Broken Social Scene. The first thing about Broken Social Scene is that they have approximately one thousand members who appear and disappear from the stage throughout the set, often returning with different instruments or to sing along as necessary. There is also the surprising realization that with more than four guitars, they might be considered a guitar band if it wasn't for the keyboard, horn section, and pair of drum sets. Aside from that sort of awesomeness, they played for almost two hours, which included both the fast and slow rendition of "Major Label Debut" and some non-protected speech (what, if any, speech laws apply to the sort of people whose t-shirts read "I'm so glad I live north of America."). Not to mention that they followed an impressive, but technical difficulty-laden, set from Feist, who is unbelievably charming and makes lovely music regardless of glitches.

That is to say, Broken Social Scene were every bit as fantastic as a guy who's been pretty obsessed with their newest album could have hoped. I think about that time that we went to see them with Stars and Jason Collett at the Crocodile, but left early on account of annoying people in the crowd with horrible perfume, and decide that we were fools not to stick around. But this was quite redemptive, and I got a cool poster that was only somewhat damaged by the need to hide it inside my jacket when I stepped outside to find an unexpected post-show downpour.

On Sunday, I caught up with Peter and Marilyn at Vivace, went to the office to do a little work, and tried to read some of the Sunday New York Times while listening to Bruce Springsteen at Bauhaus.

Finally, I forgot to mention that the Friday night viewing of King Kong (1976) turned out to be pretty hilarious. We all laughed and commented throughout, particularly on the upright posture of the guy in the ape suit and the film's "introduction" of Jessica Lange to the film world. This mostly entailed Ms. Lange's character, Dwan, wearing skimpy clothing, turning hand-me-down sailor outfits into skimpy clothing, and being overcome by "the vapors" in skimpy clothing. The bar is not particularly high for next month's Peter Jackson remake.
Collapse