"I know this is an opera house, but we're running out of time; so let's get to know each other" -- Win Butler

Tonight's Arcade Fire show concluded with a really neat extended version of "In the Backseat" that brought almost all the members of the band on a parade through the audience & directly in front of me. After their exit walk across the floor and into the lobby, they came back inside and wandered among the stragglers. 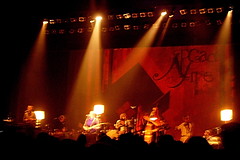 arcade fire by joshc.
here's a blurry picture of the Arcade Fire from last night's show -- the main point of which is to illustrate their giant handpainted backdrop and the series of table lamps that they bring along on the tour. For those who care about things like what songs they played, the setlist is behind the lj-cut.

( Collapse )
update: argh. had we followed them out of the auditorium, we would have heard the band playing an acoustic set outside the Paramount [idowhatican]

I'm not sure how I feel about this season of the o.c. -- first the Star Trek chick from Boston Commons shows up as a single white female-esque villain to balance out yet another two-dimensional school bad guy "Dean of Discipline" and then this week's show continues the tradition of ending the episode with an acoustic song rendition.

Last week's was "California", presumably Phantom Planet covering themselves. But this week's is some band's cover of "In the Aeroplane Over the Sea."

I did like how the "kids" ended their "give some cash to the hurricane victims" speech with a plz, thx.

update: the readers of You Ain't No Picasso say that the track is from Matt Pond, PA [#] and provide links to other Neutral Milk Hotel covers.
Collapse