Does anyone have the capability of turning the two parts of the digital camera handheld video by Jami Attenberg (whatever-whenever.net) of Death Cab for Cutie covering "Hungry Like the Wolf" with special guests Daniel Handler and M. Doughty [mb_seattle] into one audio file? I feel like this would not be complicated given the right software.

update: It looks like this will not be difficult with the newer version of iMovie. Developing. 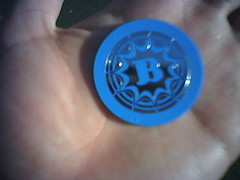 Token by joshc.
Although I went to Bumbershoot all four days, I avoided overdose by not being there all day every day. [flickr]

On Saturday I met up with Rachel and her brother Jed in the afternoon. We listened to Devotchka working their epic eastern european vibe, soaking up sunlight, and trying to decipher the monster profiles. After a few songs, we were ready to go to the EMP to hear the husband and wife team of Viva Voce. They were pretty awesome, but we missed the promised kazoo performances. When their show ended, we trekked across Seattle Center to tour of the art exhibits, which were all "interesting" if not "good". Statues made of earplugs, a simulated attic, paper burned by glass, a walk-in wasp nest, an asian-styled obsession with cells, and cool mechanical things awaited us. One piece was a fake lawn that growled and shook when stood upon. My favorite rooms were dedicated to rock & roll posters and sound installations (In resonance).

I caught part of Visqueen's set and reconvened with Rachel and Jed for food to eat while waiting to get inside the 826 Seattle benefit. Fortunately for us, we had allies in line. Jami and Whitney had arrived early and let us join them ahead of much of the rather large crowd.

The most exciting part of this event was that the house band ("Transatlantic Orchestra") was actually Death Cab for Cutie. Ben Gibbard provided acoustic musical accompaniment to Dave Eggers's lengthy letter (prose poem?) written from the point of view of an Irish Setter named Steven who is very enamored with forearm-touching and children-tutoring (Wooooo!).

The full band convened to perform various renditions of the "Battle Hymn of the Republic" along with Sarah Vowell's story about the song's history. Seriously, you're probably thinking, "could anything top DCFC styled old timey war music?" The answer is their encore cover of "Hungry Like the Wolf" with special guests Mike Doughty and Daniel Handler on accordion played in honor of raising over $18,000 from the wallets of audience members for 826 Seattle.

After the benefit, we tried to get insider information about any hot literary afterparties, but we were denied. Instead, we went to the Bus Stop until people started singing along with C&C Music Factory. The Comet (which is now apparently whitney's go-to bar when in Seattle) provided a welcome reprieve until hunger forced us to cross the street to get fried food at the Frites place by Neumo's (which was having a gay dance party instead of an indie band. weird, right?).

Jami posted a few photos from Saturday, too. [flickr ]

I went to Bumbershoot on Sunday afternoon for a couple hours to see Math and Physics Club, who are a Belle & Sebastian-like band, playing at the EMP. Stuck outside waiting, I overestimated their quietness because the speakers on the Live Videotron were off. Once I made it inside I found that they lived up to their reputation for cuteness.

Rather than leave the building to face another line, I camped out and played games on my sidekick until it was time to listen to Headphones. I don't know if they're really like Pedro the Lion, but they're definitely representative of the mopey vocals + electronics + drums genre. Not that that's a bad thing.

Since I was planning to go home for the afternoon, I paid a visit to the Flatstock exhibit and drooled over all of the awesome posters. Even though I don't really have the wallspace, I bought one to take home to put into the rotation. You can see it here [gigposters]. Perhaps I would have been able to restrain myself, but while I was inside Fisher Pavillion, there was a bit of a downpour and all of the poster goodness went to my head.

When the rain stopped, I went home, and then to a BBQ of sorts with out-of-town visitors Whitney and Jami. Drumsticks and fake burgers were on the menu along with wine, giant sausages and cheese-filled hot dogs. However, the rain clouds killed the sunset watching experience.

Soon, night fell and it was time to hike back to Seattle Center to see Elvis Costello. The stadium grounds were squishy but we soldiered on to the stage area. Luckily, we had the privilege of standing right behind a double-threat that guy -- a screamer and a dancer. He really loved Elvis, but had some trouble doing his spinning moves. Further ahead, a bird person held his cockatoo above the crowd so that it could do it's own awesome dance maneuvers, which kind of put large tie-dye guy to shame.

I think that Elvis thought that it was raining on us, since the front of the stage was still dripping from the afternoon rain storm. He did a lot of pacing and peering out over the edge of the stage to assess the crowd between songs. Maybe he was trying to spot the idiots that insisted on talking loudly during ballads.

Anyway. Good times, followed by yet another visit to the Comet.

Sunday was Go to Bumbershoot Early Day because the Decemberists had the first performance of the day on the Mainstage. This seemed like a crazy idea certain to leave the stadium underfilled, but the indie kids turned out in droves. At first, I assumed that they were all staking out places for Dashboard Confessional, but there was an appropriately massive turnover between bands. In preparation for the band, I consumed a large amount of shortcake, berries, and whipped cream.

The Decemberists started by playing the Tain [$], a five-part conceptual work based on a Celtic myth cycle. Kind of a crazy way to start a festival performance, right? Of course, they went on to play the good old songs about dead babies, prostitutes, and soliders; so everyone went home happy.

Of course, none of us wanted to admit to seeing Dashboard Confessional; so it was on to other attractions. Carole and I went to hear the Charming Snakes, who made the wise choice of using the EMP's gigantic light system to show Ghostbusters during their set.

We then set upon a quest for ears of corn drenched with butter and various seasonings. No Bumbershoot weekend is complete without corn, is it? I would like to call this corn on a stick, but is corn on a stalk more appropriate?

With our stomachs filled with buttery kernels of corn, we decided that watching short films was a good option. By the time we got into the theater, the audience was wrapping up a discussion about taxidermy and preparing for a showing of films from the 1-Reel Challenge. This year, the filmmakers worked around the theme of "Are you Fucking Kidding Me?" and came up with mixed results. Of the eight films, at least two were "good".

We skipped the Q&A and visited the apple pie stand and the Flatstock exhibit, where I bought another poster [gp]. I originally had this idea that I should diversify and stop buying so many Heads of State posters, but they're just so good that not buying them seems crazy.

Speaking of crazy, after the posters we went to see Ted Leo and the Pharmacists. Every year, it seems like there's a new winner for Most Insane Line In Bumbershoot History. This year, the gigantic snaking like to get into Exhibition Hall for Ted Leo won the prize. Out of spite and a spirit of scientific inquiry, we decided to join the line somewhere near the Western exit of the festival (map [lj]). Despite all appearances of futility, we managed to get inside by the second song. This is because most of the people in line were staking out a spot to see Flogging Molly nearly three hours before showtime.

Ted Leo was worth the not-so-bad wait, but after the show I decided that I was filled with as much bumbershooting as I could take for one weekend and decided to meet the pub quiz gang for our regular bout of trivia humiliation rather than meeting Whitney for an evening with Iggy and the Stooges. The hosts at the Irish Emigrant must be unionized, because they were taking the day off for Labor Day. So, we went down the street to Finn Maccool's instead. Although we did well, we still were no match the hordes of rowdy collegiate trivia masters.

If anyone happens to have an extra CMJ pass, I know someone who will be visiting NYC that week who might really like to have it.

The latest Gladwell essay on the American health care system must have gone online over the weekend. I read it last week, but everyone seems to be posting it today. In case you happen not to have read it or missed the links elsewhere:

A country that displays an almost ruthless commitment to efficiency and performance in every aspect of its economy—a country that switched to Japanese cars the moment the were more reliable, and to Chinese T-shirts the moment they were five cents cheaper—has loyally stuck with a health-care system that leaves its citizenry pulling out their teeth with pliers. [nyer]

Maybe he'll turn this into his next hot new book?

This might also be a good time to mention that I'm trying to post short link-type posts in my del.icio.us feed [d.i.u, xml, lj]

Jon Stewart is back from vacation!
Collapse